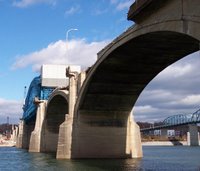 Almost a week and still no inspiration. This past Sunday my wife Susan and I strolled downtown just to get out a bit. I had hoped to find a huge chunk of ice surrounding the new fountain at Ross's Landing which I was certain would make a great photo subject but alas the city had shut the water off as soon as the temp dropped below freezing. We did wander around the Market street bridge and I shot a few pictures there. The bridge is being slowly chiselled away by a demolition crew and will be remodelled. I just hope that the city replaces it with one that has as much character as this one.
Posted by RHoward454 at 8:25 PM