NOT ALL DOGS WHO WANDER ARE LOST!


I posted the title of this blog page on Facebook as a humorous response to someone’s concern over stray and/or lost dogs. Of course, things didn’t go well for me after that and I ended up deleting the entire message thread. It did have one good result; my oldest sister saw the post and we started to reminisce about childhood days gone by and one of our goofy dogs. 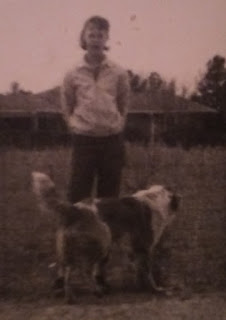 
This is where I must clarify…. We say one of OUR dogs but, truth be known, we never bought or owned a single dog ever. Oh, don’t misunderstand. We had plenty of dogs. I’d just never say that we owned one.


Our dogs just seemed to wander up into the yard. One of my sisters would give them a snack or two and the stray would tend to hang around a bit; sometimes for years! They were always to come and go as they pleased. 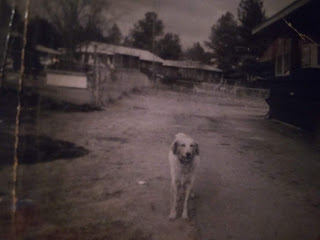 One of my favorite dogs during my junior high school years was Buster. He just wandered up one day. He was a friendly dog and we all enjoyed playing with him. My mom supplied table scraps for Buster which meant that he was always well fed. Buster followed us every where we went. We’d hike down to the creek and Buster was always right there with us. If we went for swim in the creek Buster went for a swim too! Buster even had a few odd talents (for a dog). He would bring things home. And I mean good things like hand tools, clothing, and cakes. Yes cakes. He once came home with a Dolly Madison Pound Cake, fresh in the un-broken wrapper. We eventually found out that he had discovered that one of our neighbors’ storage room doors didn’t latch properly and Buster would help himself (and us) to whatever he could get away with.


One fateful day when we were all playing in the front yard Buster walked out into the road in front of our house. He put his head down like a charging bull and did just that; charged a car and butted it head on. It knocked him through the air about 10 yards and he spent the next hour or so running around in crazy circles. He’d vanish for days at a time after that but always seemed to make it back to our house for one more snack. I have to say that I really don’t remember what eventually happened to Buster. I know that my sister Janet will tell me. She could make this story so much more interesting that I am able.


Anyway, the whole point of this story is this. When I see a stray dog, I don’t jump to the foregone conclusion that it is lost. I don’t think that it has escaped from its yard. I just assume that it’s a free spirit exploring its world. I know that there are people who feel distressed over this and feel that they must “rescue” the poor lost animal. I don’t, and I make no apologies for being this way.
Posted by RHoward454 at 7:48 PM 1 comment: