In case anyone out there wonders where I have been lately here's the short(est) version.
Around the first of May I had a terrible stabbing pain in my chest, painful enough that I went to my doctor as quickly as possible. I had a chest X-Ray and then went home to await the results. I had just gotten back to the house and tried to relax on the sofa when my doctor called to say that there was something on my x-ray and that he scheduled me for a CT Scan the very next morning. I instantly thought through all of the worse case scenarios and had a fitful night. Next was the suspenseful part; after the CT Scan was completed I had a couple of days' wait for the results. About three days later I got a call saying that the CT Scan showed something and the I had now been scheduled for a PET Scan. A PET Scan? What is that?! I looked it up on the internet. It apparently has only one function which is to pinpoint cancers. I know that I am moving quickly here now but after the PET Scan the results took several days and then I got the dreaded call. Two masses in the upper lobe of my right lung had "lit up" the PET Scan, medical lingo for cancer. My doctor told me that if it was him he would not wait another day, he'd have it cut out just as quickly as possible. My wife and I went home to think things through and I started to try to plan being away from work for a while. The next weeks and half was nerve wracking. I worked at a frantic pace to try (unsucessfully) to catch up at work, to call friends, and to ask for family, friends, and anyone else who would offer to put me on prayer lists. I called people I had not talked to in months and months. When I finally felt that I could not wait any longer I had my surgery scheduled for May 18 and on that day I had the upper third of my lung removed. The doctor warned me it would hurt. "I'm tough", I thought. "I'm in good shape, how bad can it be?" I pondered smugly. The first two days were not too, too bad. I had a chest tube protruding from my torso. I had a catheter (a rather unpleasant thing in itself). I had a epidural with a button that I could push to administer pain killers directly into my spinal canal (a great invention that lulled me into a false sense of ease). I muddled through the next few days, resting fitfully, waiting for the pathologist report. I got my 52nd birthday present one day early this year. I got the official word that the growth in my lung was not malignant. NOT MALIGNANT! Did you hear that?! NOT MALIGNANT! I will not have to undergo chemo or radiation. I will recover from this.
I had all the tubes and hoses removed on Tuesday the 22nd. That's when the real pain began. The epidural had been saving me from the worst of the pain and now I was on my own. They tell me that I will hurt for weeks, maybe months. I cannot really say that the pain has diminished yet. I sleep fitfully a few hours at a time and have a heck of a time getting out of bed and off the sofa. I worry about my job although I know that people there are very supportive of me and are taking care of my work in my absence. I am extremely lucky to work with such great people. I will survive this.
And now a few items of important relevance:
I smoked heavily for 30 years of my life.
I quit smoking 5 years ago which may have been just in time.
I will have to see a pulmonary doctor every three months for years.
I will survive.
To my children Tiffiny and Michael and my youngest sister Dana: Please stop smoking now. You don't have to experience what I am going though right now.
Posted by RHoward454 at 8:29 PM 4 comments: 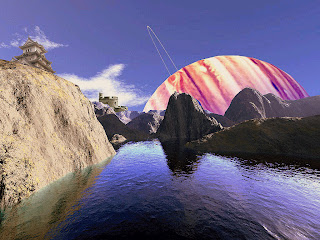 Since it's been a while since I last posted anything on my blog I thought that I would display the image above. The base image (lanscape) was created with a freeware program called Terragen. I then created several layers and added the castles and planet with Photoshop. Merging the various layers produced the end result above. I am still learning how to use the Terragen program but it IS fun to create landscapes from scratch.