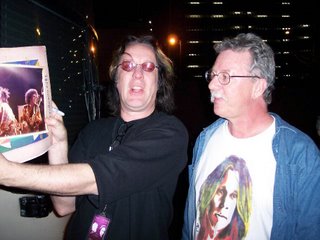 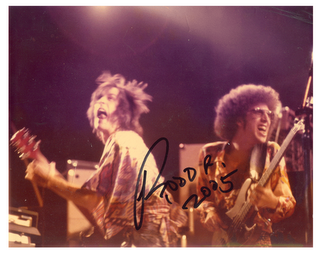 Here's another copy of that picture from my Photo Friday: FAMOUS blog entry. This is the one that I keep put away with fond momentos from days gone by. As I mentioned in an earlier blog entry I shot the concert picture in November 1974. The neat thing is that I finally got that picture (and a few others) autographed in May 2005. After 31 years I was in the right place at the right time to finally meet Todd Rundgren in person, share a couple of laughs, and bug him for a few autographs.
On that earlier blog entry Mark Martin (not the race car driver!) had posted a comment with just two words....."1974" and "sheesh". That got me to thinking and one of the thoughts that I had was of the first time that I saw Todd Rundgren in person. Guess who I went with to that show? Mark Martin (not the race car driver!). Mark, do you remember that? I have these vague memories of setting out one bright November day in 1973 in a Volkswagen Beetle piloted by Martin Muzer. I don't even rember the passenger in front seat but I do remember that Mark Martin and I were crammed in the back. Martin pushed that old VW down I-20 towards Tuscaloosa and the University of Alabama much harder that he should and the thing quit running somewhere just outside of Vance, Alabama. We spent a very uneasy hour or so wondering if we were going to make it to the concert but fortunately for us Martin's older brother Jeff had just started to UA a few months earlier and he drove out and got us to Tuscaloosa on time.
I had a fantastic evening, shot lots of pictures, and somehow made it back home. Anyway, I've rambled to this point just to try and jog my own feeble memory. Help me here Mark! Who was that fourth person in the VW? Where is Martin Muzer these days? Do you even remember that day? Am I remembering it all correctly or is my memory playing tricks on me? I wish I had the memory that my sister Janet has.
As Todd Rundgren once said ".......take a few of these, sweeter memories......"
November 1973.
Riding to Tuscaloosa, Alabama in a VW Beetle driven by Martin Muzer.
Rubbing elbows with Mark Martin (the famous comic book artist!)
Enjoying a Todd Rundgren concert.
Not worrying about how we were going to get home.
Posted by RHoward454 at 9:34 PM 7 comments: 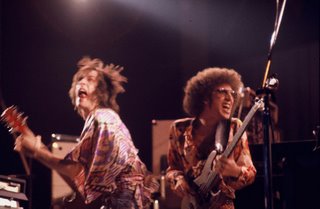 The word for the week at Photo Friday is FAMOUS. I pondered on this one for quite some time and finally decided that I'd pull an old one out of the hat. The photo is from a concert by Todd Rundgren's Utopia. This shot was taken in November of 1974 at the Boutwell Auditorium in Birmingham, Alabama. From left to right (for the uninitiated) Todd Rundgren and John Siegler. 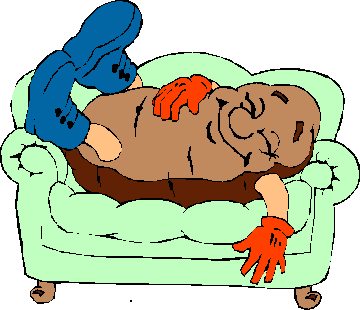 I haven't posted much on the old blog lately. It's finally turned nice outside and I MUST start some sort of exercise regimine to shed the excess 35 pounds I've gained during the last 6 or 8 months. Saturday I mowed the lawn and Sunday I took a three mile walk. I vow to start walking at least three days a week again until I have lost at least 40 pounds!

Thanks to http://www.pcbypaul.com/wpclipart/cartoon/ for the clip art image
Posted by RHoward454 at 12:19 AM 2 comments: 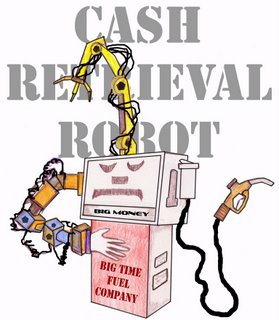 FEELIN' THE PINCH!
My drawing for this weeks' ILLUSTRATION FRIDAY. I tried and tried to think of something better but in the end the gas pump won out. In this illustration if you don't willingly give it up the upper arm will hold you while the side arm rifles your wallet.
Posted by RHoward454 at 12:15 AM 8 comments: 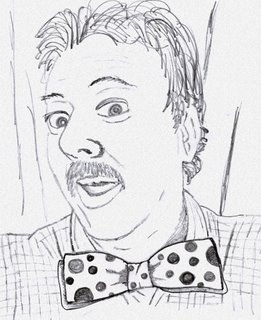 My cheesy drawing for Illustration Friday's subject SPOTTED. A combination of photography, pencil sketching, and a bit of photoshop background texturing. I wouldn't really wear polka dots with checks, would I? Yeah probably; Susan says that I can't dress myself without her help!
Posted by RHoward454 at 10:11 PM 8 comments: 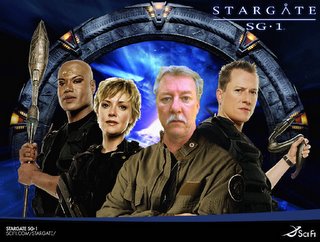 My computer crashed Thursday and it has taken me the better part of two and a half days to get things working correctly again. And to top off the weekend I came down with some sort of nasty sinus infection or cold late last night. I have felt pretty much like crud all day today....BUT, none of that has anything to do with this picture. My wife thinks I have become enamored with my own image but to be honest she will hardly allow me to take her picture to use in these flights of photo manipulating fancy. You just gotta use what you have. Oh well. I "borrowed" this idea to insert myself into a promo for one of my top five all time favorite television shows, Stargate SG1 from Robert McLaughlin, a very fine photographer from Oceanside, California. And the original picture itself was scarfed from the download section from http://www.scifi.com/stargate/. I love this show. What better life for a door and hardware salesman than to peddle his wares in the far reaches of the known universe!
The original picture has not been licensed by me for display here, so ....my apologies to SciFi.Com, the producers of Stargate SG1, and Richard Dean Anderson.
Posted by RHoward454 at 9:27 PM 3 comments: 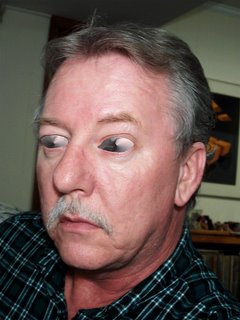 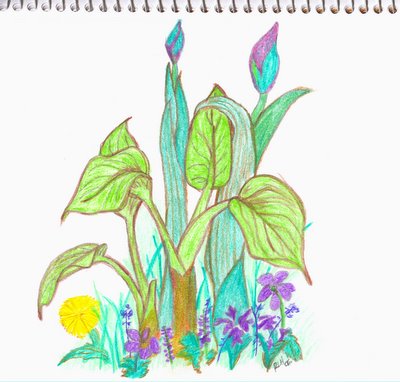 My sketch for the this weeks' ILLUSTRATION FRIDAY theme which is SPRING. The Iris' and Hostas are starting to grow at a fast pace and today I saw my first Dandelion of the season. We have quite a lot of Henbit in our yard also. The lawn care companies leave flyers on my mail box telling me that it's a weed and should be dealt with as such but I sort of like the look of them with their dark green leafs and dainty purple flowers.
I also posted a PhotoShop enhanced version of the sketch on my blog but I think that I overdid it somewhat. You can see it here. I prefer this one though.
Posted by RHoward454 at 7:26 PM 5 comments: 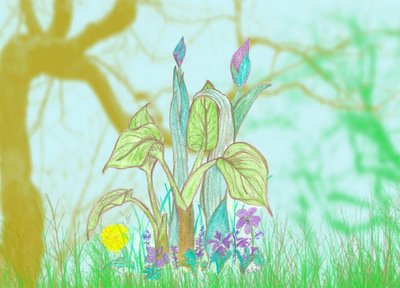 This is a drawing that I did for Illustration Friday. The subject being Spring I thought it appropriate to sketch some of the plants that have suddenly awakened in the back yard. As I can never leave well enough alone I added background layers to the scanned image with PhotoShop. I think that I prefer the original un-adulterated image here.
Posted by RHoward454 at 7:14 PM No comments: