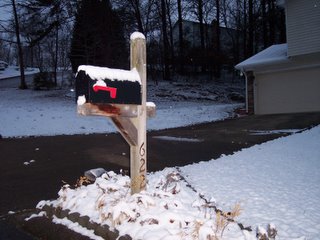 The Perfect Snow
Saturday night we had the perfect snow. I call it perfect because it was really pretty for a few hours and then gone by about 10:00 am Sunday morning. Susan and I were watching movies late Saturday oblivious to the goings on outside. You see, we don't get too shook up when they predict snow here in Tennessee. We lived in Michigan in 1996 and we had enough snow for a lifetime. I remember that it actually snowed on Halloween night, then again a few weeks later, and then just when you'd think it was going away it would snow some more. After the first few days it was ugly, stained with road grime, car exhaust, and the constant salt and ash the highway department puts out to make travel on the slick roads somewhat possible. We came to hate the thought of snow and vowed to never again reside in an area where it snowed more than two or three times per decade.
But back to this past weekend. It was perfect. We had just finished our last movie and were headed upstairs when Susan looked out front and announced that it had obviously been snowing for several hours. The yards were covered with a pristine white powder and the occasional break in the clouds allowed the moonlight to cast a shimmering glow to the new fallen snow. There was not another soul stirring in our neighborhood and at that moment the world was a peaceful, beautiful place.
Sunday morning I got up around 7:30, grabbed the camera as I headed out to get the newspaper and took this picture. As you can see, the snow was already beginning to melt off the roads, driveways, and sidewalks. By around ten o'clock it was gone altogether. No sidewalk or drive to shovel. No hazardous conditions on the roads. Perfect!
Posted by RHoward454 at 8:08 PM

I love snow!
OK, enough arguing - I have Todd questions for you:

1. While visiting Benny, I was exposed to "Todd With a Twist", the Las Vegas Muzak versions of Rundgren greats. I thought I was gonna hurl! What do you think?

2. Todd will tour as a member of the New Cars in summer 2006? Do you know if that means Ric Ocasek's Cars? Or something totally different?

3. Trivia, not really a question: A lady I know used to play tennis with Todd!

2. Yes, Ric Ocasek's Cars. Ric O has no desire to re-unite with the Cars and the "New Cars" will consist of two original Cars members Elliott Easton and Greg Hawkes joined by Todd Rundgren and Kasim Sultan (and possibly Prairie Prince). They will perform a mixture of tunes by The Cars, Todd Rundgren, Utopia, and Kasim. If this blog thing will allow I will include a link to a New Cars promo

Just for the record.
I am and always be a devoted Todd Rundgren FAN.
I am NOT and never will be one of the many blind devotees that think Todd Is Godd... There are actually many Todd works that I do not particularly like.

That's the best kind of snow to have....it comes, and goes away quickly. We had a little dusting..