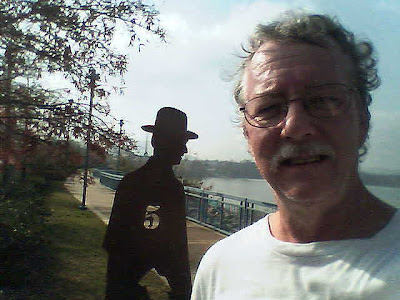 Yeah, yeah. I know that this is a pretty poor picture of me looking really ragged, but I am very proud of this picture for several reasons. I shot this with my cell phone camera last Sunday at the Tennessee Riverwalk. I shot this at the five mile marker on the trail where I ran approximately 9 1/2 miles. By the way, I started at an area called the Frye Fishing Center which has an excellent park and a cafe called "OUT OF THE BLUE". It's just past the one mile marker. I ran (and walked) to the six mile marker before turning around. The weather last Sunday was great with temperatures in the low 70's (unlike today, a mere 7 days later, when we had snow flurries). This is my first real outdoor run after my lung surgery back in May. Oh, I do run approximately 5 1/2 miles 4 to 5 days a week at the gym but running on a treadmill just isn't the same as the great outdoors. Also, the dynamics of running outdoors seems entirely different than running on the treadmill. I do know one thing. I LIKE RUNNING OUTDOORS. I have to commend Chattanooga and Hamilton County for providing such a great park in which to run. The trail extends 8.5 miles one way, from the Chicamauga Dam to the Tennessee Aquarium. There are several rest areas with toilets and water and there is a great family park with a playground and snack bar that has great raspberry tea and deserts (as well as an excellent selection of kites!). This is time well spent and I plan on doing a lot more of it. I am hoping to get myself in good enough shape to run a race in the spring. We'll see how it goes!
Posted by RHoward454 at 9:17 PM

I know you've got it in you to run that race in the spring! But, I have to ask...how do you know the desserts at the snack bar are good?? : )
I like their mile markers too.
Hope to see you soon!
Love you,
Dana