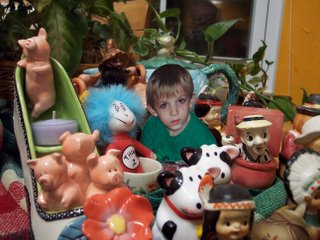 My wife collects all sorts of knick-knacks such as glass shoes, salt & pepper shakers, costume jewelry, and decorative odds and ends. We've gotten several funny and unique ones on E-Bay. Most are either cute, colorful, or unique and the kids always can't resist playing with them........Oh look! There's Braxton and Thing 2 right in the middle of a bunch of bric-a-brac now. For an 8 year old he's quite a story teller. A couple of years ago he started telling us how he would go on long walks on the mountain or down by the Tennessee River with his "uncle" Jack Daniel. He would describe the most amazing adventures that he and "uncle" Jack had. Someone suggested that it might not be too wise for such a young boy to spend too much time with someone known for making whiskey and before you could say "Big Brother Blake" three times "uncle" Jack went away. It was about that time that he started spending time riding on a big green tractor with his new uncle John Deere. I've never met uncle John but while he was around he and Braxton had several adventures. I've not heard mention of uncle John in a while so I don't press......perhaps he's gone back to where ever those odd uncles come from in the first place.
Posted by RHoward454 at 9:23 PM